e-Dossier: The Geneva Conference on Indochina of 1954 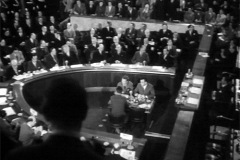 The who is who of world policy congregated: «the Geneva Conference gave us the opportunity to receive statesmen in Berne, I would never have thought we would welcome in the Federal Palace» thus concluded foreign minister Max Petitpierre in September 1954 to the diplomatic body (dodis.ch.32116, original in French).

Between April and July 1954 high-ranking representatives from the United States, Great Britain, the Soviet Union, France, the People’s Republic of China, North and South Korea, Laos, Cambodia, Vietnam and the Viêt Minh negotiated on the conflicts in Korea and Indochina. Switzerland did not participate in these negotiations held in Geneva, but provided for the organisation of the conference. On July 1954 the conference ended with the signing of the armistice agreement to end the Indochina conflict.

On the sidelines of this international meeting, foreign minister Petitpierre, welcomed conference members such as the soviet foreign minister Vyacheslav M. Molotov, the Chinese head of government Zhou Enlai and French President of the Council of Ministers Pierre Mendès France. Molotov praised the «wise policy» of the Swiss statesmen and the «favourable atmosphere» for international conferences in Geneva (dodis.ch/9031, original in French).

Zhou Enlai was also impressed by the organisation of the conference (dodis.ch/8175). The long-time head of government is said to not to have continued expressing himself favourably for the reception on a par by neutral Switzerland for years, especially because the People’s Republic, which was then in many places still regarded as a «second-rank nation», had given its debut in international circles. «According to him, Geneva is the most beautiful city of Europe» (dodis.ch/35904, original in German).

Also UN Secretary-General Dag Hammerskjöld met with the Federal Council. During dinner at the Lake of Murten Hammerskjöld succeeded in dissuading Petitpierre from withdrawing the Swiss delegation at the Supervisory Commission in Korea. The communist side would have considered such a move as giving in to the American position, whereas the continuation of the Swiss mission in Korea consolidated the policy of neutrality (dodis.ch/9580).

The Indochina conference was «without doubt a positive occasion for Switzerland», as Petitpierre summed up in front of his diplomats: «it afforded the opportunity for statesmen, who have never been here before, to get to know our country and to find a friendly discussion and working atmosphere […] Without overestimating the advantages brought about by the conference, I think, that our international position and our standing as a neutral state are strengthened» (dodis.ch/9558, original in French).