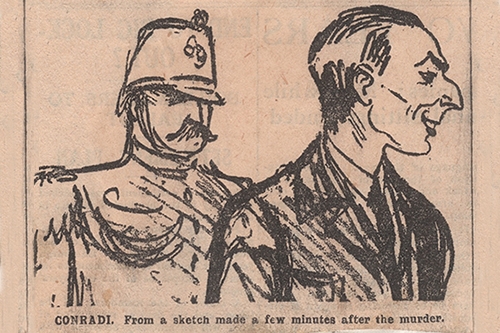 It was a murderer’s confession: «Perhaps, only posterity will understand and will thank me for being the first to openly fight these international band of criminals», Maurice Conradi went on record with the Lausanne police. On 10 May 1923, Conradi, a Swiss citizen living in Russia, had shot Soviet diplomat Vatslav Vorovsky in the hotel Cécil, in front of witnesses. After the killing, Conradi made no attempt to resist arrest. He was an offender by political conviction: «Among those who played their part in the ruin of Russia, and indirectly of all mankind, there are no innocents» (dodis.ch/48619).

Conradi‘s family emigrated from the Grisons in the mid-19th century and operated a thriving sweets factory in Saint Petersburg, the then capital of tsarist Russia. After the 1917 October Revolution, their assets were expropriated, Conradi’s father and uncle were murdered by Bolsheviks. In the Russian civil war, Conradi fought the «Reds» as an officer of the «White Army». After the defeat of the counter-revolutionary forces, he fled to his native country via Turkey. Here, he met Russian expatriates, who allegedly incited the fiery anti-Bolshevist to commit the murder.

«The crime of a private citizen against other private persons»?

The day after the murder, the Federal Council met in Bern. In a communiqué, the national government condemned with «outrage» this «violation of morality and of the law». The Federal Council did not, however, deem any further action necessary. In a juridically over-subtle assessment, the government found the assassination to be, not a crime against the state, but an «ordinary crime, committed by a private citizen against other private persons» (dodis.ch/44914). Although Soviet diplomat Vorovsky had been delegated as an observer to the orient conference in Lausanne, he had not been listed as an official conference participant, due to international antagonisms (dodis.ch/44913).

Tipping the scales towards a suspension of relations

The Federal Council’s attitude towards the assassination was politically precarious. Five years previously, in November 1918, Switzerland had expelled a Soviet mission by accusing the Bolshevist diplomats of «revolutionary propaganda» that supposedly helped bring along the national strike (dodis.ch/43740). Ever since, relations between Bern and Moscow were frosty (dodis.ch/44885). The «Conradi Affair» was to tip the scales, resulting in a decades-long suspension of relations between Switzerland and Soviet Russia. Only after WWII would the two governments resume official contacts.

In a diplomatic note, foreign secretary Georgy Chicherin vehemently criticized the Federal Council’s response to the murder: the «illegitimate refusal» to grant Vorovsky diplomatic status, Chicherin claimed, was an «unacceptable and inimical act» and created an «abnormal and ambiguous situation» in which the Soviet delegate had been subject to hostilities. The authorities, Chicherin continues, had subsequently «taken no precautionary measures» to prevent an attack on Vorovsky. For this reason, the Swiss government carried a «heavy and absolutely obvious responsibility» for the murder, was complicit in it (dodis.ch/44916).

The Federal Council responded to Chicherin’s «bold and malicious accusations» with a strongly-worded telegram. The Federal Political Department (today’s Federal Department of Foreign Affairs), led by the ardent anti-communist Guiseppe Motta, briskly rejected all reproaches and launched a counter-attack. The department stated that it was up to the Soviet government to finally bring about some form of reparation for the «outrageous acts of violence and robberies» committed during the revolution against thousands of Swiss citizens living in Russia (dodis.ch/44917). The highly emotional court proceedings against Conradi, too, were to follow this logic.

Acquittal of the murderer

The proceedings of the jury trial in Lausanne, in November 1923, were less focused on the actual killing than on an assessment of Russia’s Soviet regime. Conradi’s deed was contrasted in an explanatory manner with his family’s tragic fate, the general suffering of Swiss citizens living in Russia, and the victims of the Bolsheviks (dodis.ch/48632 and dodis.ch/48633). The jury indeed acquitted the proven murderer, which caused massive indignation not only in Russia. The Federal Council, in turn, rejected all rebukes levelled against it, citing federalism and the separation of powers (dodis.ch/44953).

Late resumption of relations, at a high price

Soviet Russia banned Swiss citizens from entering and leaving the country and boycotted all Swiss goods. Although Moscow would soon signal interest in the «regulation of relations» it nevertheless insisted «on a certain gratification in the matter of Vorovsky» (dodis.ch/44999). The case was repeatedly negotiated with the assistance of international mediation (dodis.ch/45015 and dodis.ch/45172). A provisional solution was reached in 1927 (dodis.ch/45319). But it was to take until 1946 for Bern to achieve the resumption of official relations with the USSR – at a high political price (see e-Dossier).