e-dossier: The Washington Agreement of 1946 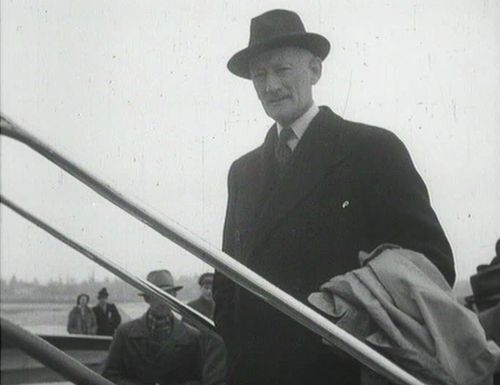 In spring 1946, a high-ranking Swiss delegation visited Washington to negotiate the release of frozen Swiss assets in the USA as well as the end of the allied boycott of companies that, during WWII, had traded with the Axis Powers. In turn, the USA, Great Britain, and France demanded that Swiss banks hand over German assets. The Washington Agreement (dodis.ch/1725), finalised 70 years ago, on 25 May 1946, after difficult negotiations, represents a milestone in Swiss foreign policy. It was the clearance that ended Switzerland’s isolation and prepared the way for the country’s integration into the post-war world.

«a trial to any freedom-loving Swiss»

Near the end of the war, in 1944, the Allies increased their pressure on Switzerland. The country was regarded as a war profiteer that upheld tight economic relations with Nazi Germany even as the German defeat became inevitable. «It would indeed be a trial to any freedom-loving Swiss to feel that he had in any way impeded the efforts of other freedom-loving countries to rid the world of a ruthless tyrant», US President Franklin D. Roosevelt reprimanded Swiss Federal President Eduard von Steiger in January 1945 (dodis.ch/47946). The Swiss media were less roundabout, stating that «the American press accuses us of supporting their enemy» (dodis.ch/47994, original in German). In Spring 1945, an allied delegation demanded the freezing of German assets in Switzerland, the cessation of exports and of all gold trade with the Reich, and the termination of the transit between Germany and North Italy.

On 8 March 1945, Switzerland largely agreed to the conditions stipulated by US chief negotiator Lauchlin Currie (dodis.ch/47990). Yet the so-called Currie Agreement left unresolved the question of German assets in Swiss banks, and the related question of the Swiss banking secret. Swiss bankers opined that to disclose customer information would «deal a death blow to the reputation for discretion» and that this would prove «ruinous, as foreign capital would flee elsewhere at the first opportunity» (dodis.ch/48006, original in French). The bankers pointed to «these foreign assets‘ contribution to the Swiss balance of payments and national revenue», venturing that «it would be a catastrophe to destroy for decades to come that which was built in past decades» (dodis.ch/67, original in German). Federal Councillor Max Petitpierre, the new Swiss Minister of Foreign Affairs, assured them that Swiss diplomacy had «always taken the interests of Swiss banks into consideration and does not intend to change its attitude» (dodis.ch/38, original in French).

Pressure from the USA persisted. Washington froze Swiss assets in the USA and blacklisted persons and companies that had traded with Germany. The Federal Council nominated Walter Stucki, a high-ranking Bernese diplomate, as the chief delegate in a new round of negotiations with the USA, Great Britain, and France. In a preliminary meeting, Stucki asserted: «On the matter of Swiss Sovereignty, we will in no way be haggled with» (dodis.ch/65, original in German). He declared his «main goal» was «to find an agreement with the Allies [...] that reflects Swiss juridical principles and interests whilst also being apt to dispel the atmosphere of distrust vis-à-vis Switzerland still predominant among the Allies today.» Minister Stucki’s plan was to diminish the demands step by step, up to the «demolishing of the basis of the allied claim» (dodis.ch/68, original in German).

These expectations were quickly destroyed by what the Swiss delegation encountered in Washington. In April, Stucki was forced to personally travel to Berne for new instructions, reporting to the Federal Council that «two walls» were facing each other. In the Allies’ opinion, German assets in Switzerland were theirs, «not from a legal, but from a higher, moral point of view». They held that Switzerland was, «as a privileged state saved by us, obliged to make these resources available to us». The Americans bluntly informed the Swiss delegation that if its members did «not change their opinion», they would best «return home» – according to Stucki, «a scandalous insolence». The Americans’ unusually brusque style of negotiation, however, mirrored the distribution of power: «The Allies indeed have the means to make our lives [...] quite miserable», as the experienced diplomat put it (dodis.ch/48220, original in German).

When Stucki returned to Washington with new instructions, a «veritable torrent of attacks and defamation», awaited him. Ultimately, the delegations agreed that money that German citizens had put in Swiss bank accounts would be liquidated, paid out in half to the Allies – «as a voluntary contribution to the rebuilding of Europe» – and in half to Switzerland, in compensation for its claims against Germany. More than the Swiss had expected, allied demands focused on the question of the gold in the vaults of the Swiss National Bank, purchased «in good faith» from the German Reichbank. Ultimately, Switzerland transferred to the Allies «Nazi Gold» at an overall value of 250 million Swiss Francs, however, «without recognition of a legal obligation». In fact, this «compromise» was only slightly less than the allied demands that in Switzerland had been perceived «as insolent and impossible to meet» (dodis.ch/69, original in German).

The question of «dormant accounts»

The Washington Agreement can be accessed and read in detail, with its various annexes, on the Dodis database at dodis.ch/1725 (which includes links to all appendices). All documents relating to the negotiations can be found using the permalink dodis.ch/R27201 and the keyword Washington Agreement. Not all of the agreement‘s appendices were made public in 1946. A document that was kept confidential is a letter regarding the «possessions, in Switzerland, of victims of the violent crimes, recently committed by the former German government, who died without heirs». The Federal Council intended to examine «sympathetically» the question of these «dormant assets» in Switzerland (dodis.ch/1730, original in French). The «unclaimed assets» would occupy diplomats for decades to come (see dodis.ch/T619), with the real éclat following only after the end of the Cold War, in the 1990s.

The judgement of historians

«I do not know how future historians will judge the operation we carried out», William E. Rappard, advisor of the Swiss delegation, wrote to Federal Councillor Petitpierre after negotiations had ended. The Geneva-based professor assumed that the achievement regarding the gold would receive praise, whereas there would be less patience for the «surrender of principles» with regard to German assets. That the small country nevertheless succeeded in denying «a significant part» of the three Great Powers’ demands, Rappard writes, «is, in my eyes, close to a diplomatic miracle» (dodis.ch/17, original in French). However Switzerland, with its financial and industrial capacity, was by no means the lightweight as which it represented itself. In addition, the country profited from the emerging Cold War. It is less the contents than the long-term consequences of the Washington Agreement that are central: For the normalisation of relations with the superpower USA, almost any sacrifice had to be accepted.