e-Dossier: 75 years after the end of World War II in Europe 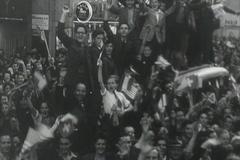 The words «church bells herald the end of the hostilities» marked the beginning of President of the Confederation Eduard von Steiger’s speech on May 8 1945 on the radio: «The excruciating agony of the war-ridden people is coming to an end» (dodis.ch/30882). In a more confidential setting a few days later, the Foreign Minister Max Petitpierre expressed mixed feelings in front of representatives of the parliament and cantonal governments: «The joy evoked from the end of the hostilities is subdued by the discovery of the suffering inflicted in systematic cruelty on millions of people, who were deported into the concentration camps of Hitler-Germany» (dodis.ch/320, original in French).

Survivors of the concentration camps

Despite the federal agencies’ knowledge of the annihilation policy of the Nazi regime as early as 1942 (cf. e-Dossier dodis.ch/dds/1720), Switzerland too was shocked by the magnitude of it. The country opened its borders for the transit and hospitalization of prisoners of war, forced laborers, deportees and refugees (dodis.ch/1705). Children of the concentration camp in Buchenwald were accommodated in Switzerland for purposes of recreation. Out of «moral interest», Bern took the risk that «in six months or in a year, there could be some difficulties getting rid of some of them again» (dodis.ch/13, original in French).

In his speech, Petitpierre also highlighted the fact that a return to peace was still far away and that looming conflicts could also cause a new war. On May 11 1945, the Federal Council partially lifted its ban on exports of war material in effect since October 1944, which would signify «a substantial easement for our industry» and would have «a favorable effect on the question of provision of employment» (dodis.ch/1214, original in German). Emil Georg Bührle, the leading exporter of war material, subsequently intensified his efforts to develop new markets. However, the federal agencies were not able to support him openly in that matter (dodis.ch/3681).

The future of Germany

After the capitulation of Germany, the Federal Council established that the «Empire has not disappeared as a state but is lacking a government» (dodis.ch/32060, original in German). However, Switzerland was the only country that did not acknowledge the sovereignty of the Allied occupation over Germany (dodis.ch/2082). Accordingly, the Federal Council appointed a Swiss diplomat in charge of fiducial representation of German interests in Switzerland on May 18 1945 (dodis.ch/1218).

The end of the war was marked by an accumulation of conflicts between supporters of communism and Western democracies. The Soviet Union, with whom Switzerland did not entertain diplomatic relations since 1918, criticized Switzerland’s economic and financial relations with the Axis powers up until the end of the war, allowing them to bring their looted assets into safety in Switzerland. To counter accusations concerning the treatment of Soviet internees, the Federal Council decided to publish documentaries filmed in the «Russian camps» (dodis.ch/1215).

Allegations especially against the Swiss financial center also increased from the Western allies. Swiss bankers called it a finance war, orchestrated by the US administration on the initiative of Wall Street. At a meeting of the Bankers Association with the Federal Council, General Director of the UBS Alfred Schaefer stated that: «To sacrifice bank secrecy to Anglo-American inquisition» would mean «to question the existence of the banks themselves». Petitpierre replied that Swiss diplomacy has always represented the interests of the banks and would continue to do so: «Still, we have to consider the fact that the problem of defending the interests of the banks has to be included in the general problem of defending Swiss interests (dodis.ch/38, original in French).