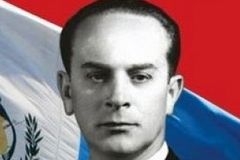 On June 27 1954, a covert operation carried out by the CIA overthrew the democratically elected president of Guatemala. It was one of the first large US intelligence service operations in Latin America. The coup d'état against Jacobo Árbenz, whose father had emigrated from Andelfingen (Zurich) to Guatemala, appeared also on the agenda of the Swiss diplomacy.

Jacobo Árbenz Guzmán was elected president of Guatemala in 1951. In his inaugural speech Árbenz emphasised his will to transform Guatemala from a «backward country with a feudalistic economic system» into a  «modern and capitalistic country», as reported legation councillor Ernest Schlatter, who was delegated to the inauguration by the Federal Council. Schlatter saw the fact that Árbenz wanted to push back the influence of the USA from the region, as an opportunity for Swiss foreign commerce. Árbenz had assured him of «his big sympathies for our country and his wish to develop as much as possible the diplomatic and economic relations» (dodis.ch/8695, original in French).

Árbenz' project of a comprehensive agrarian reform brought Guatemala into conflict with the powerful US food corporation, United Fruit Company, and the US government. Hereupon, US media spread the rumour that Árbenz was a dangerous communist. Swiss observers such as August R. Lindt, head of the Swiss delegation at the United Nations in New York, tried to evaluate the situation in a more differentiated way (dodis.ch/9583, cf. also dodis.ch/9382). The swiss envoy in Caracas, Pierre François Brügger, held sympathy for Árbenz' «nationalistic» policy of socialisation in the light of «the aggressive approach of some large companies established in Central and South America [...] Everybody knows that the ‹United Fruit Co.› had acted up as an all powerful lord» (dodis.ch/9332, original in German).

When, in the course of the violent overthrow, Árbenz had to flee from Guatemala, Lindt reported back to Berne: It is «generally assumed here that Washington had given ‹green light› for the beginning of the action» (dodis.ch/9380, original in German). The affair became problematic for Berne when Árbenz entered Switzerland for the first time in 1955 and announced that he intended to establish permanent residence for him and his family in his father's home country (dodis.ch/9378). Would Guatemala's former president plead for his Swiss citizenship or would the Federal Council be able to prevent his permanent stay in Switzerland?

In the meantime, the coup d'état in Guatemala had in fact damaged the image of Switzerland in the US. The Swiss arms industry was reproached for delivering arms to the Árbenz government (dodis.ch/9326 and dodis.ch/9384). Additionally, the Swiss roots of the «communist» were a significant stain in the spirit of the rigid McCarthy-Era (dodis.ch/9200). Therefore, Berne was relieved when the unwelcome visitor left the country after three months. From 1967 to 1969 Árbenz lived again in Switzerland (dodis.ch/34070 and dodis.ch/34072). However, as a Guatemalan patriot, he never claimed his Swiss citizenship - not least because this would have made it impossible for him to return to politics in his country. Árbenz died in 1971 in Mexico under unexplained circumstances.