e-Dossier: Stalin's death – The View of the Swiss diplomats 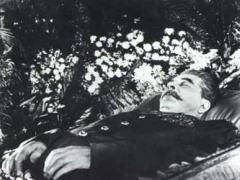 «A couple of stout Soviets carried our very heavy, and for that matter very beautiful crown. The words “Swiss Federal Council”, written in golden letters, adorned it’s red and white ribbon. I walked behind them with my wife and party», as the Swiss emissary Camille Gorgé states in his report to Bern, from 10 March 1953. «The procession was extremely slow-paced; it was only half an hour later, whilst an orchestra was playing a funeral symphony in the background, that we passed Stalin’s mortal remains, laid down in a flowerbed, in a coffin draped in red silk, with his bust slightly raised» (dodis.ch/9028, original in French).

A last glance at the «great dictator»

On 5 mars 1953 the soviet dictator Joseph Stalin died. Since the end of the 1920s, he had ruled over the Soviet Union with practically unlimited power. His terror regime had claimed millions of victims. The obsequies in Moscow evidently created a strong impression on Minister Gorgé. In the Mausoleum, on the Red Square, where Stalin was exposed next to Lenin's corpse, Gorgé threw a last glance at the face of the «great dictator»: «One contemplates, one cannot but contemplate how many people he has mercilessly removed from his way. But this thought is immediately followed by the notion that, had he not been harsh and implacable, he would not have been Stalin, and that probably, very probably he would not be where he can now be seen: in complete apotheosis.» Such a positive depiction of the «power-obsessed tyrant» was to be toned down as of 1956, through the «destalinisation» (dodis.ch/12938).

A power struggle for Stalin's succession

In the following weeks and months, analysing the consequences of Stalin's death on Soviet politics became a priority issue for Swiss diplomacy. As Gorgé's unsuccessful visit to the Minister of Foreign Affairs, Vyacheslav M. Molotov shows, the Soviet government maintained silence on the matter (dodis.ch/9020). Switzerland thus had to turn to diplomatic channels to have the opinion of Soviet specialists such as Charles E. Bohlen, the US ambassador in Moscow. They heard from him about the atmosphere of distrust and the struggle for power between Stalin's aspiring successors (dodis.ch/8527).

A release of tension between the East and the West?

In his speech before the assembled Swiss diplomatic corps in the Autumn of 1953, Max Petitpierre, member of the Federal Council, also speaks about Stalin's death (dodis.ch/9557). He explains that the unclear succession represents an «element of uncertainty». But even so, the dictator's demise seems to have brought about an improvement of living conditions, both in the Soviet Union and in its satellite states, as well as having led to a release of tension (at least temporary) in international relations between the East and the West.

«The Conference on Security and Co-Operation in Europe does not end with the ceremonial signing of the final act in Helsinki on August 1st of this year. In fact in many ways it is just beginning» stated a circular of the FDFA in October 1975. Nevertheless, it marks a milestone of European history, reached at that time. For Switzerland, it designated a decisive step in the opening of its foreign policy.