e-Dossier: Beginning of the Corea mission 1953 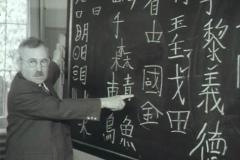 «Even if we keep out of World and European politics, that does not mean, that we are not interested in the events happening around us or that we try to avoid all responsibility», said Federal Councillor Max Petitpierre addressing the Swiss diplomatic corps in September 1953. «On the contrary», he added, «the Federal Council is convinced that we have to participate in those international tasks in the service of peace that are not incompatible with our neutrality» (dodis.ch/9557, original in French).

The birth of military peace support

The «international tasks in the service of peace» referred to by the Swiss Foreign Minister were the participation of Switzerland in the Neutral Nations Repatriation Commission (NNRC), which handled the repatriation of the prisoners of war after the Korean War, and the Neutral Nations Supervisory Commission in Korea (NNSC), which supervised the armistice. This mission consisted initially of almost one hundred Swiss military personnel and diplomats and took up its duty in summer 1953 in Panmunjom at the demarcation line on the 38th parallel. Furthermore it was Switzerland's first military peace support mission abroad.

On July 27th 1953 an armistice ended the Korean War (dodis.ch/T1221) which had lasted more than three years. The conflict between the Democratic People’s Republic of Korea (North Korea) and the Republic of Korea (South Korea) had developed into a proxy war between the two blocks of the Cold War after the intervention of Communist China on the one side and the United States and the UN on the other. The four «neutral» states, that were to form the two supervisory commissions, were chosen by the warring parties themselves. While South Korea chose Switzerland and Sweden, North Korea appointed two Eastern European socialist states, Poland and Czechoslovakia. India was given the lead in the NNRC.

Collaboration with the Communists

The advocates of Swiss neutrality were caught in a dilemma by these two missions. Especially the collaboration with the «neutrals» of the socialist block proved to be difficult: the «known devious methods and dialectical abilities of the Communists» resulted in various «embarrassing surprises», states an internal note of the Political Department (Swiss Foreign Ministry): «Instead of fulfilling the practical task of the mandate, the Swiss representatives, who had to collaborate with Communists in Korea, had to defend against these Communists the notions and ideas thus far generally acknowledged by civilised nations. Their work was thereby perceived in a totally different light that is not useful for our policy of neutrality and the general appreciation thereof» (dodis.ch/9636, original in German).

Consequently, the Swiss mission was not undisputed. The difference of opinion on how far an «active policy of neutrality» could go, can be shown by the controversy between Foreign Minister Max Petitpierre and the Minister of Justice Markus Feldmann (dodis.ch/10913). Criticism of Switzerland’s role in the neutral commission also came from abroad (dodis.ch/9601). Some of the difficulties of the mandate were recorded in a report by Armin Däniker, who was in charge of the delegation to the NNRC until February 1954 (dodis.ch/9594). His colleague brigadier Ernst Gross of the NNSC was reprimanded by Petitpierre for his «unnecessarily severe» critique of the Communist members of the commission (dodis.ch/9675). At times, Berne even considered to withdraw from the Supervisory Commission (dodis.ch/9603, dodis.ch/9339 and dodis.ch/10673).

On the other hand, the Foreign Ministry considered Switzerland’s participation in supervising the armistice in Korea to be suitable to «enhance Switzerland’s prestige and to emphasise its role as an independent state. Such missions, moreover, serve to make Switzerland’s permanent neutrality known in the world and to convince the public opinion of the worth of this institution.» (dodis.ch/9636, original in German). A great success of Swiss diplomacy was a diplomatic note sent to Bern by the US Department of State during the preliminary negotiations about a Swiss participation. Washington highly praised – after some initial irritation about the Swiss attitude (dodis.ch/9640) – Switzerland’s neutrality and «good offices» (dodis.ch/9605).

Plea for an active neutrality

The public opinion in 1953 was in principle in favour of the mission in Korea. This showed, as Petitpierre puts it in his address to the diplomatic corps, that the Swiss understood, «that we can better defend our neutrality when we participate in international peace missions, despite their potential risks and uncertainties, than when we totally keep out of current events that do not affect us directly» (dodis.ch/9557, original in French).

The Swiss participation in the NNSC continues until today, even though the number of staff in the delegation at the Korean border has been reduced over the years to five officers. A peace treaty between North and South Korea has so far not been concluded.