e-Dossier: The suppression of the «Prague Spring» 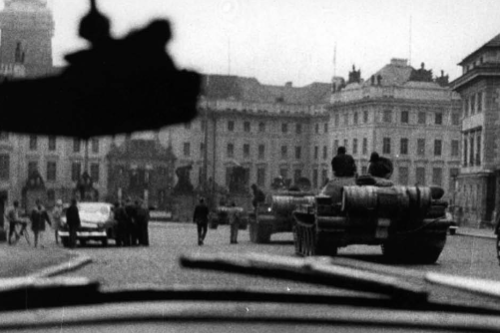 «Have been taken under Soviet fire. Shots were directed at embassy building», the Swiss representation in Prague wired to Bern on 21 August 1968 at 11.30 a.m. (dodis.ch/50871). The embassy was then located in the Schwarzenberg palace, right outside the gates of Prague Castle. When troupes of the Warsaw Pact occupied Czechoslovakia in a sudden attack, the Swiss diplomats found themselves at the very center of the dramatic events. It remains unclear why the Red Army opened fire on the embassy. In response to repeated protest, Moscow finally claimed that not its own soldiers but «provocateurs and ‹saboteurs›» were responsible for the shooting (dodis.ch/32184).

Hopes and fears of the «Prague Spring»

Samuel Campiche had been Swiss ambassador in Prague since April 1967. From the beginning, he was a witness to the reform efforts of Czechoslovakia’s new party leader Alexander Dubček, to the growing public support for an extensive agenda of liberalisation and democratisation, to the «dynamic development full of surprises», and the «breath of freedom» that was in the air (dodis.ch/50779). The «Prague Spring» of 1968 inspired hopes for a «socialism with a human face». It also inspired fear. «The fundamental question everybody in Prague is more or less openly asking themselves today is that of knowing whether the USSR, if necessary, will use force», Campiche reported to Bern in July 1968 (dodis.ch/6180).

«Feelings entirely with the Czech people»

When in the early morning hours of 21 August, tanks rolled past beneath Campiche’s bedroom window, it was clear that the Kremlin was willing to crush the reform movement in the ČSSR with the full power of its military (dodis.ch/32516). «Due to the conspiracy of imperialist forces and reactionaries» and in view of the «threat to peace», the Soviet Union and its allies had decided to follow the Czechoslovakian government’s request and intervene, was how the Soviet chargé d'affaires in Bern explained the events to the President of the Swiss Confederation, Willy Spühler, just hours later. The latter critically responded that news from Czechoslovakia were of an occupation. «The chargé d'affaires should not be in any doubt that the feelings of the Swiss are entirely with the Czech people» (dodis.ch/32192).

The «brutal and nasty Russians»

The same day, the Federal Chancellor made a statement in the name of the federal government. The «Swiss people» had, in the past months, «observed with sympathy» the Czechoslovakian population’s «unequivocal wish» for «greater freedom in the field of personal rights» and had to «ask with some concern today whether the independence and existential rights of small nations are again threatened in the current world» (dodis.ch/49267). Intense hostility was directed towards the «brutal and nasty Russians» – as one concerned citizen’s letter of protest to the Soviet embassy put it (dodis.ch/32195). Diplomats were harassed, the Soviet bank of commerce and the Zurich branch of Aeroflot vandalised, and the pilot of an airliner from Moscow verbally abused by Kloten air control (dodis.ch/32194).

No suspension of relations

In many quarters there was a demand for suspending all relations to Warsaw Pact states. The Federal Council would not hear of such measures. On several occasions, Spühler spoke in parliament asking for «calm and thoughtfulness». «A suspension of diplomatic relations with the Soviet Union would only contribute to abandoning the people there to their isolation», the President of the Confederation said. «However, it is not us who should fear contact, but those who oppress freedom» (dodis.ch/32187). The «Prague Spring» in particular had «shown clearly that expanding and deepening relations with the rest of the world eminently promoted an easing and a need for new mental horizons» (dodis.ch/50874).

The wave of solidarity for Czechoslovakia also expressed itself in a very generous policy with regard to accepting refugees. On 30 August 1968, the Federal Department of Justice and Police decided «to grant at least a temporary stay in Switzerland to any Czechoslovakian, regardless of whether or not he is seeking asylum». The «complete opening of borders» led to a «run on our diplomatic missions» as well as on the «border collection points» in St. Margrethen und Buchs (dodis.ch/33048). With its «open-hearted hospitality» (dodis.ch/50874), Switzerland became the most important receiving country in the European area. Until 1970, immigration authorities granted political asylum to 11.000 Czechoslovakians (dodis.ch/35677).

All Dodis documents concerning the «crisis in Czechoslovakia» and the suppression of the «Prague Spring» can be found at dodis.ch/T941.