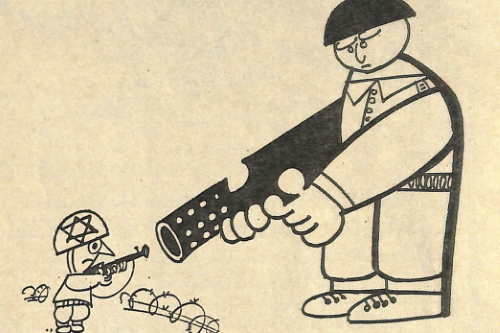 By diplomatic standards, it was a highly unusual démarche. On 6 June 1967, the heads of no less than eight Arabic missions met with Federal Councillor Willy Spühler to forcefully protest the Swiss public and media’s one-sided, «anti-Arabic tendency». «This violates the spirit of Swiss neutrality», the ambassadors claimed, referring in particular to Switzerland’s considerable interests within the Arabic countries, to the trust put in Switzerland by the Arabic public, and to its exemplary role as a neutral country. «In order to ensure Switzerland’s beneficial role in the future, we ask you, Federal Councillor, to help curbing […] the present anti-Arabic tendency», was how the threat was diplomatically phrased (dodis.ch/33280).

In favour of «David», against «Goliath»

The previous day, Israel’s surprise attack on Egypt had begun the Six-Day War (dodis.ch/T901). A swift victory enabled Israeli forces to gain control of the Gaza Strip, the Sinai Peninsula, the West Bank, and the Golan Heights. The Swiss public’s sympathies for the Israeli «David» and his struggle against the Arabic «Goliath» grew into a veritable euphoria at this point. Against this background, a communiqué released by the Federal Council on 5 June 1967 appeared ambiguous. On the one hand, the Swiss government expressed its «dismay» at the recent events and pledged to support the restoration of peace by offering the traditional «good offices» of its diplomacy.

On the other hand, however, the last section read: «The Federal Council shares the feeling of the Swiss people, who over the past days have come to the renewed and powerful realisation that, to a neutral microstate, loyalty to law and the demonstration of its determination to defend itself are the primary conditions for ensuring its existence and its right to be» (dodis.ch/33961). «Surely, the ‹microstate› cited in this text is a reference to Israel, not Switzerland», the Lebanese ambassador reprimanded the Federal Council: «Everybody interpreted it that way». Foreign minister Spühler denied this as a misreading and endeavoured to explain the difference between the state’s obligation to be neutral and its citizens’ freedom of opinion and freedom of the press (dodis.ch/33280).

The third Arabic-Israeli conflict had drastically increased diplomatic sensitivities. Switzerland remained under pressure. Analogously to the démarche in Bern, the Arabic representatives in Geneva sent a note of protest to the Director General of the UN bureau. The Swiss public’s partisanship «obviously contradicts the principles of neutrality, which were crucial in the choice of Geneva» as seat of the United Nations (dodis.ch/49522). The Swiss observer at the UN in New York gave alarm: «It would not be altogether surprising any more if the Arabic states [...] were to set in motion actions, skilfully orchestrated by the Austrians» to seriously favour Vienna over Geneva as the seat of UN organisations (dodis.ch/49523).

Despite all criticism, Switzerland remained in demand: after the cessation of military action, the neutral country was asked to act as a protecting power, representing the interests of the states that had discontinued their relations due to the crisis (dodis.ch/33679). The Federal Council also strove to contribute to a solution of the conflict’s humanitarian fallout (dodis.ch/33950  and  dodis.ch/33953). From the start, however, Swiss diplomacy did not want to take on an active role as mediator. Propositions to that effect were rejected (dodis.ch/33278) with reference to the failed appeal for peace during the Suez Crisis (see e-Dossier). The UN, too, was believed unable to achieve a solution in the current crisis.

A Swiss representing the UN Secretary-General

Therefore, the request made by the UN Secretary-General in August 1967 came as a surprise. U Thant asked the Federal Council to make available top diplomat Ernesto Thalmann for reporting, on his behalf, to the UN General Assembly on the situation in Jerusalem (dodis.ch/32620). The Federal Council quickly agreed to the prestigious task. For two weeks, Thalmann was delegated to Jerusalem as U Thant’s personal representative (dodis.ch/32897 and dodis.ch/33530). Swiss diplomacy could chalk up the «Thalmann Mission» as a success. It was positive proof that neutral Switzerland’s «good offices» were still held in esteem, and it served to burnish Switzerland’s tattered image in the Arabic states (dodis.ch/33287).