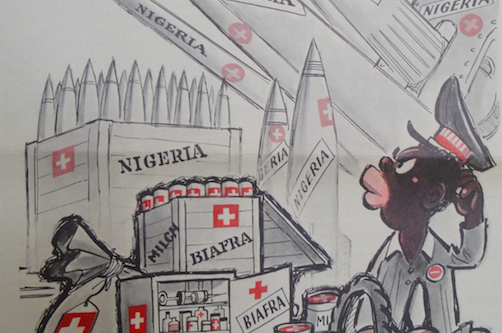 For months, Fritz Real had been suspecting that large numbers of illegally exported Swiss anti-aircraft guns were used in the Nigerian civil war. Finally, on 12 June 1968, the Swiss ambassador in Lagos obtained the decisive clue: «Today, I now have received information from a reliable source», the diplomat wrote to Bern, «that clearly indicates a blatant violation of Swiss export provisions by Bührle & Co.» Real recommended that the Department of Foreign Affairs «thoroughly investigate» (dodis.ch/33502) the matter. What the authorities subsequently uncovered was the single biggest weapons export scandal in Swiss history.

After independence, post-colonial Nigeria was the site of several struggles for political supremacy. Even before the open conflict caused by the secession of Biafra in the East of Nigeria, the Federal Council issued an export ban on war material for the West African country in April 1967. The Nigerian civil war and the devastating hunger catastrophe it caused, attracted unprecedented levels of media attention in Switzerland and widely prompted humanitarian action by the government, aid organisations and the general population. The idea of «Swiss charter aircrafts used by the Red Cross being shot down by Swiss guns» significantly contributed to the Bührle affair turning into a full-blown scandal (dodis.ch/33501).

Gradually, the officials would realise the scandal’s full scope: in violation of the embargo, Bührle had delivered roughly a hundred 20mm guns to Nigeria. The authorities had been duped with forged non-re-export declarations that made it seem like the guns were being sold to Ethiopia. Instead, the war material was rerouted to Nigeria, exports to which had been banned (dodis.ch/33452). It soon became apparent that Bührle’s shipments to Nigeria were only the tip of the iceberg. Deliveries allegedly going to France, Belgium, Iran and Indonesia were all redirected to the embargo-states Israel, Egypt, Saudi-Arabia, Lebanon and Malaysia. Almost two thirds of the weapons, however, went to South Africa – after the Federal Council had banned exports there in December 1963 (dodis.ch/48480).

Mild verdict by the Federal Court

Although the Federal Council had been in possession of clear evidence for months, only in late 1968 did the police begin investigating affiliates of Oerlikon-Bührle (dodis.ch/33499 and dodis.ch/33433). The investigation showed that between 1963 and 1968, the company had supplied embargo-states with military material at a total value of around 90 million Swiss Francs – roughly 16% of Bührle’s weapon sales. The defendants had «for years ruthlessly abused» the trust of the authorities. «Their business conduct in the case of Nigeria» had been «particularly reprehensible». In November 1970, director Dieter Bührle and three employees were found guilty of falsification of documents and sentenced to prison terms of 8 to 18 months and fines of up to 20.000 Swiss Francs. The verdict was comparatively mild since there was no legal basis for punishing the illegal exports (dodis.ch/36188).

The consequences of the Bührle scandal reached beyond these criminal proceedings. A number of motions in parliament inspired intense public debate about exports of military material. The authorities subsequently toughened the mechanisms for controlling and approving applications for weapons exports (dodis.ch/35692). The fundamental dilemma, however, remained unresolved: «The Swiss export principles have little to do with morality, they are based on opportunism», reads an unsparingly open internal administrative memo from 1971: «For the sake of honesty, this should not be covered up all the time» (dodis.ch/35572). A radical solution was formulated by the popular initiative «for more armament control and the prohibition of weapons exports». It was voted down, in 1972, only narrowly, with 49.7% yes-votes.

«A weakening of the defence industry and of national defence»

Finally, a new federal law on military equipment, which came into effect in 1973, further restricted exports of military material. No exports were now approved to territories «in which an armed conflict is taking place or threatens to erupt, or in which other dangerous tensions are present». Also, weapons shipments would not be allowed if they were found to interfere with «Switzerland’s efforts in the international sphere, especially those towards the respect for human dignity and those in the areas of humanitarian aid or development aid». In a 1977 public talk, Dieter Bührle rebuked these provisions as «a weakening of the Swiss defence industry and thus of national defence» – «even if, at the time, we contributed not insignificantly to bringing about today’s regulation» (dodis.ch/50324).

All Dodis documents on the «Bührle affair» can be found under dodis.ch/T622. Additional information on the relation between the Nigerian civil war and the uncovering of the Bührle affair is found in volume 5 of the series Quaderni di Dodis: «SOS Biafra» (dodis.ch/q5).