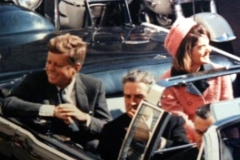 On November 22, 1963, the U.S. President John F. Kennedy was assassinated in Dallas. The death of this charismatic public figure, who had been a bearer of hope to many, left the whole world in a state of dismay and sorrow. Precisely when the news reached Bern, a dinner-reception was being held by Federal Councillor Hans Schaffner in honour of Ambassador W. Michael Blumenthal, Deputy Special Representative for Trade Negotiations of the U.S. Department of State: «The shadow of the terrible happenings, which were made known during the meal, hung over the entire discussion. More so in light of the fact that Blumenthal had been a trusted confidant of the late President» (dodis.ch/18885).

The federal Council does not wish to appear insensitive

The following day, an extraordinary meeting of the Federal Council took place. In his introductory remarks, Willy Spühler, President of the Federal Council, stressed «what a blow the murder of the President of the United States dealt to the free world, and how much our people too were upset by this dreadful event». At the centre of the discussion was the question of whether the Federal Council should, for the first time in its history, send one of its office-holding members to the obsequies. Federal Councillor Friedrich Traugott Wahlen raised the question «whether by pursuing our neutrality policy and pushing the danger of creating a prejudice so far, we would appear insensitive» (dodis.ch/30765). The Federal Council therefore unanimously decided that, as Minister of Foreign Affairs of the Confederation, Wahlen should take part in the state funeral. In the years that followed, the number of trips abroad made by Government members would increase rapidly.

From Kennedy’s burial to the «Kennedy Round»

The day after the funeral, which took place on November 25, Wahlen visited the U.S. Foreign Minister Dean Rusk at the Department of State. Rusk stressed his Government’s appreciation of the fact «that a function-holding Federal Councillor had for the first time come to Washington due to this sad occasion». The focus of the discussion was less Kennedy himself than the sixth round of negotiations of the multilateral General Agreement on Tariffs and Trade (GATT), which was named after him and was due to start very soon after. Wahlen recommended Switzerland to Rusk «with its traditional liberal policy and its low customs» as «a natural ally» of the U.S.: within the «Kennedy Round» of the GATT, Washington wanted to support the worldwide removal of trade barriers (dodis.ch/18903).

The «watch dispute» with the U.S.

The emphasis on liberal values was connected to the persistent «central problem in Swiss-U.S. trade relations», in other words the high import duties on Swiss watches in the U.S. (dodis.ch/18884). The conversation between Schaffner and Blumenthal also turned to the «watch dispute» (dodis.ch/T623), in which one had hoped to achieve a breakthrough in November 1963. President Kennedy had indeed seemed ready to cut the import duties on watches. The corresponding decree was «practically […] already on his desk, ready to be signed, when he was murdered», according to a note issued by the Political Department, the current FDFA (dodis.ch/30950).

Efforts in favour of the Swiss watch industry were once again set back by Kennedy’s death. It was only in 1967, when the «Kennedy Round» was coming to an end, that Schaffner, the Minister of Public Economy, was able to announce the tariff reduction, which had much been hoped for (dodis.ch/33140).