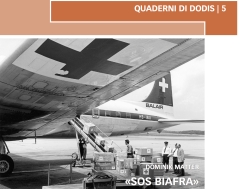 The newly published fifth volume of the series «Quaderni di Dodis» centres on Switzerland's foreign relations in the context of the Nigerian civil war, 1967–1970. «SOS Biafra» was the International Committee of the Red Cross's appeal to the public, in May 1968, to support the relief mission in the secessionist area, which was completely isolated. Next to such public appeals, it was chiefly images of starving children that temporarily brought the war and the impending humanitarian crisis in Nigeria to public attention in the west.

In the wake of the Nigerian civil war

The Swiss authorities faced numerous political challenges related to Biafra: the ICRC mission, the Bührle affair, the so-called «Biafra propaganda» by the Geneva Markpress agency, or the petition for the recognition of Biafra all indicate the complexity of the subject. On the basis of this constellation, the new publication traces the interaction of government and non-government agents in the development of Swiss foreign relations in the context of the Nigerian civil war.

The publication of the fifth volume of «Quaderni di Dodis» also gives proof of the DDS research centre's success in promoting its up-and-coming scholars. The author, Dominik Matter, was an intern with DDS as part of his studies four years ago. For two years, he subsequently worked at the centre as an assistant researcher, and is now a researcher there. Matter successfully submitted «SOS Biafra» as his MA thesis at the University of Bern, supervised by Prof Dr Christian Gerlach. The «Quaderni di Dodis» series allows for results of the thesis to be made available to other researchers, as well as the public, in Open Access form.