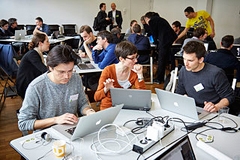 The DDS are pleased with the interest in their data and would like to thank all who have participated in this project.