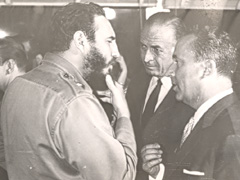 «If neutral Switzerland did not exist, we [would have] had to invent it», an influential advisor of US President John F. Kennedy said in March 1962 to the Swiss ambassador in Washington, August R. Lindt (dodis.ch/18897). This «complete satisfaction» was also  due to the Swiss representation of US interests in Cuba, which came to an end in August 2015 due to the renewal of diplomatic relations between Havana and Washington.

Representation of interests during the «Cold War»

It was one of the peaks of the Cold War: In January 1961, the US State Department enquired in Bern if the Swiss embassy in Havana would be willing to assume the diplomatic and consular interests of the US in Cuba from now on (dodis.ch/15005). Earlier, relations between the super power and Fidel Castro’s communist island state had escalated, culminating in expropriation of US businesses and a export embargo against Havana.

During the Cuban Missile Crisis in 1962, when the Soviet Union was building launching platforms for middle-range missiles, an act of war between the two great powers appeared threateningly close (cf. e-Dossier dodis.ch/dds/1696). In this situation of crisis, ambassador Lindt was approached by the US Secretary of State Dean Rusk, if Switzerland could probe Castro’s intentions «on its own initiative» (dodis.ch/19007, original in German). In the end, the conflict was settled between Moscow and Washington.

More than a protecting power

Not just this episode documents that the scope of the Swiss mandate went beyond what would normally be considered usual tasks of a protecting power. It secured the Swiss Confederation a privileged access to relevant political authorities in Havana and Washington. For example, Swiss diplomats succeeded in mediating the establishment of an airlift between Varadero and Miami, via which Cubans were able to legally leave the country (dodis.ch/34511) as well as the signing of a treaty against hijacking.

A tricky situation emerged with the question of the nationalisation of the former US embassy on the waterside promenade Malécon in central Havana, where the Swiss representation of interests took up residence (dodis.ch/30978). In spring of 1970, violent anti-American protests broke out and Swiss diplomats were directly at risk. Only several high level interventions helped to defuse the situation (dodis.ch/34500).

Not only relations between Washington and Berne improved due to the representation of interests in Cuba. Also the bilateral relations to the communist Caribbean nation profited. For example, in 1967 it was possible to agree upon contractual compensation payments for subsidiaries of Néstle that were nationalised in the course of the Cuban revolution 1960. The debt to the Swiss food group was paid in the form of sugar deliveries (dodis.ch/32269).

A beret from Fidel Castro

Between the «Máximo Líder» and ambassador Emil Stadelhofer, who was head of mission in Cuba between 1961 and 1966, a real bond of trust developed (dodis.ch/40943). At times, Castro would visit Stadelhofer even late at night for talks at the residence (dodis.ch/18933). During an official reception in 1964 in front of the «crème de la crème of the Cuban revolution», Fidel Castro presented the Swiss diplomat with the olive-green beret of his uniform as a personal present in recognition of his services (dodis.ch/30888, original in German).