e-Dossier: The Helsinki Final Act of the CSCE in 1975 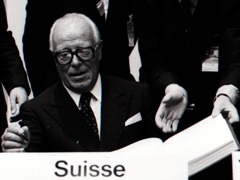 «The Conference on Security and Co-Operation in Europe (CSCE) does not end with the ceremonial signing of the final act in Helsinki on August 1st of this year. In fact in many ways it is just beginning» stated a circular of the Federal Department of Foreign Affairs (FDFA) in October 1975 (dodis.ch/38875, original in German). Nevertheless, it marks a milestone of European history, that was reached at that time. For Switzerland, it designated a decisive step in the opening of its foreign policy.

In 1969, after repeated Eastern European attempts to initiate the idea of a communal European security conference, Swiss diplomacy was interested yet sceptical. A task force of the FDFA came to the conclusion that in regard of the project «a certain reserve from official side was in order» (dodis.ch/32405, original in German). However, during the 1970s, the FDFA increased its diplomatic visits – secretary general Ernesto Thalmann disrespectfully talked about «diplomatic tourism» – in order to discuss potential opportunities and goals of the conference project with the East and the West (dodis.ch/34494 and dodis.ch/34496, originals in German).

Beginning of the CSCE

In November 1972, the pre-negotiations for the CSCE began in Helsinki. The Federal Council had decided that Switzerland should attend (dodis.ch/34487, original in German). «If our country were to stand outside» a position paper of the FDFA stated, «it would contradict the fundamental rules of our policy of neutrality and solidarity, of openness and co-operation» (dodis.ch/34499, original in French). In Helsinki, it became clear that the USSR was primarily concerned to consolidate the territorial status quo in Eastern Europe and the Soviet dominance. Western states, however, sought to get concessions of Moscow in the area of human rights. Already in this phase, Switzerland played an active role both as a participant as well as a mediator (dodis.ch/38816).

On the basis of the position papers written in Helsinki, the actual negotiations began in September 1973 in Geneva. Together with the neutral and non-allied states of Europe (Group of N+N), Switzerland played a central role here. It put forward own proposals and forged compromises in order to mediate between opposed positions of East and West (dodis.ch/38848 and dodis.ch/38858, originals in German). Again and again, termination or stagnation of the multilateral talks loomed. The tough diplomatic power struggle for a joint final act continued until June 1975.

The signing in Helsinki

On August 1st 1975, 35 heads of state of almost all European countries as well as of the US and Canada signed the CSCE final act in Helsinki. For Switzerland, President of the Swiss Confederation and head of the FDFA, Pierre Graber, was present in the Finnish capital.  The results of the CSCE meant «both little and a lot», he remarked in his speech: «Little, if viewed isolated and as the endpoint of a long and difficult exercise. A lot, if they stand for a sign and promise of an actual new era of international relations» (dodis.ch/38867).

The way to the CSCE

Indeed, August 1st 1975 did mark the beginning of a long process. At the CSCE follow-up meetings in Belgrade (1977-78), Madrid (1980-83) and Vienna (1986-89), the implementation and extension of the regulations of the final act of 1975 were negotiated under changing preconditions. The collapse of the communist regimes in Eastern Europe initiated an institutionalisation that lead to the renaming of the CSCE to Organization for Security and Co-Operation in Europe (OSCE) in 1995. In 1996 and 2014, the OSCE was presided by Switzerland.

All documents concerned with the CSCE currently published in the online database Dodis can be found via the permalink: dodis.ch/T983.