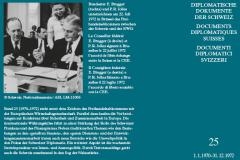 «Europe» was already the most important issue of Swiss diplomacy in 1970. As was written by Paul R. Jolles, Head of the Division of Trade of the Federal Department of Public Economy (FDPE), in relation to the upcoming negotiations with the European Economic Community (EEC), «the attempt to establish a newer and more suitable type of conditions for cooperation requires a fertile imagination, as well as sufficient time». «The trickiest problem will no doubt be the organising of Switzerland’s institutional collaboration in the integration process» (doc. 44, dodis.ch/35774, original in German).

Free trade agreements with the EEC

Accepted by both the people and the cantons in December of 1972 (doc. 182, dodis.ch/35776), the elaboration of the free trade agreement with the EC constitutes the core part of the new volume of the Diplomatic Documents of Switzerland (DDS). This volume, number 25, focuses on Switzerland’s  foreign relations from 1970 to 1972. This edition of documents comprises telegrams, circulars, correspondence between Swiss diplomatic representations and the headquarters in Bern, the minutes of sessions of the Federal Council, as well as memos and work papers originating from various federal departments. In relation to the agreement with the EEC, Federal Councilor Hans-Peter Tschudi recorded the fact that it would lead «to a development of our country in the direction of Europe […] that would be practically irreversible» (doc. 160, dodis.ch/35778, original in German). Many documents are reminiscent of the challenges with which Swiss diplomacy has been dealing up to this day in more than just the solving of «institutional issues» with the EC.

The origins of the OSCE

More than forty years before Switzerland’s 2014 presidency of the Organisation for Security and Co-operation in Europe, the Federal Council and the Federal Administration developed an active travel policy, in order to exchange views with Eastern and Western Governments, regarding the European Security Conference that would take place in Helsinki, in 1973 (doc. 156, dodis.ch/34494 and doc. 157, dodis.ch/34496). Switzerland became highly involved in this organisation, the OSCE’s predecessor organisation. Bern explicitly attempted to play a part in the proposal for a system that would enable the peaceful settlement of disputes (doc. 173, dodis.ch/34487). «Were our country to be absent, this would go against the fundamental rules of its policy, the basis of which is neutrality and solidarity, openness and cooperation» (doc. 144, dodis.ch/34499, original in French), as stated in a 1972 policy document of the Political Department, the present FDFA.

Mutual legal assistance treaty with the U. S.

The negotiation process which took place in May of 1973 is another reminder of current affairs, as it lead to the still valid mutual legal assistance treaty with the U.S. According to a permanent study commission, a «noticeable loosening» of the concept of sovereignty took place in the years prior to the negotiations, and «never before had so much been expected of Switzerland in the field of legal aid» (doc. 66, dodis.ch/35400, original in German). The U.S. interest in international crime fighting became an increasing threat to the Swiss banking secret, which the financial centre as well as trading associations protected strongly every time it was being attacked.

In light of an overflow of dollars, in 1971, the Swiss Federal Council, in agreement with the National Bank, decided to reevaluate the Swiss Franc. To the people, this was proof of the Government’s courage and decisiveness – «we were finally ruled over for once» (doc. 72, dodis.ch/35737, original in German).

This was followed in summer by President Nixon’s termination of the U.S. dollar’s convertibility to gold. This was one of the last symptoms that indicated the upcoming crumbling of the Bretton-Woods system, which in turn, would lead to the Swiss Franc’s being increasingly used as a reserve currency (doc. 140, dodis.ch/35401). Nello Celio, the Swiss Minister of Finance, was concerned about the developments he observed in the global monetary and economic policy. «Along with the National Bank […], I believe that we must, in time, become further engaged in monetary issues, if we want to be in control of something», were his words to Eberhard Reinhard from the Swiss Credit Institution (doc. 166, dodis.ch/35598, original in German).

Foreign Minister Graber too recognised «that in the monetary sector, Switzerland was not far from becoming a Great Power» (doc. 66, dodis.ch/35400, original in French). Some were however more critical in this area as well. When the Swiss Bank Corporation tried to push the Federal Banking Commission to hurry the opening of a Japanese bank’s branch office in Zurich, as it was the condition for the SBC to itself be able to open a branch in Tokyo, it was given a harsh answer: the Commission «never disguised the fact […] that it considered the massive increase in big banks as well as the inflow of foreign banks into Switzerland as unhealthy and damaging to the country’s general interest» (doc. 117, dodis.ch/35515, original in German).

A characteristic of the early 1970s is the growth of international terrorism, the effects of which even Switzerland could not avoid. With the plane crash caused by a bomb exploding on board an aircraft in the area of Würenlingen in February (doc. 8, dodis.ch/35440 and doc. 12, dodis.ch/35468) and the hijacking of a Swissair aircraft on its way to Jordan, which was orchestrated by the Popular Front for the Liberation of Palestine, in September 1970 (doc. 37, dodis.ch/35415), Switzerland became increasingly caught up in the Arab-Israeli conflict. A particular challenge came in the form of the abduction of Giovanni Enrico Bucher, the Swiss Ambassador in Rio de Janeiro, by Brazilian Guerilleros (doc. 51, dodis.ch/35840 and doc. 59, dodis.ch/35841).

A traditional subject that becomes more important in volume 25 is that of Switzerland’s «good deeds». To what lengths should one go when one acts as an «honest broker»? This is the type of question that Swiss Ambassador Silvio Masnata, who represented the U.S. interests in Cuba, asked himself. Was he to convey messages to Havana on behalf of Washington, which – based on his knowledge of U.S. interests – he thought ought to be improved? «If you notice someone on the street who is about to step into an open manhole, do you not shout out to them to be careful?» (doc. 76, dodis.ch/34509, original in French). Switzerland especially played this part when the negotiations between the U.S. and the Soviet Union regarding nuclear arms reduction were transferred to Geneva (doc. 155, dodis.ch/35513), or in the case of the conflict surrounding the independence of Bangladesh (doc. 87, dodis.ch/35284 and doc. 106, dodis.ch/35311), in which Switzerland was given a double mandate empowering it to act as protecting power for the interests of both India and Pakistan (doc. 113, dodis.ch/35283 and doc. 126, dodis.ch/35309).

The rise of China

Through the organisation of a exchange of diplomats, Switzerland was also able to play an active part in dealing with the tensions taking place between the People’s Republic of China and Cambodia (doc. 121, dodis.ch/35750). With Peking’s admittance to the UN in 1971 (doc. 102, dodis.ch/34306) and President Nixon’s visit to China in 1972, the «Middle Kingdom» again became a focus of Swiss foreign relations. In his talk to the diplomatic corps, Federal Councilor Graber recorded the fact that «the centre of gravity of world politics» had shifted from Europe to Asia and that in the future, China would «play a political part which would match its geographic and demographic size» (doc. 89, dodis.ch/34585, original in French).

«Does one dare wear the bold swimming costume?»

A certain normalisation came into place, with regards to the «divided states». Bern recognized North Vietnam, for instance (doc. 90, dodis.ch/35603) and in the context of its position in the Armistice Commission, it dared a – however unsuccessful – attempt to take up diplomatic relations with North Korea (doc. 168, dodis.ch/35837). In its relations with the GDR too, the setting up of diplomatic representations on both sides meant that, in the words of Hansjakob Kaufmann - the Head of the newly opened representation in East Berlin - Switzerland was taking a «first step into the cold water». To him, this was not enough: «We should not act like a lady who owns a somewhat bold swimming suit, but then, can never muster the courage to actually wear it.» (doc. 181, dodis.ch/34373, original in German). In the end, on December 20, 1972, shortly before most of the other Western countries, Bern took up diplomatic relations with the GDR (doc. 179, dodis.ch/34372).

«What the people must not be informed of»

Switzerland’s foreign policy became a growing subject of public debate. The FPD focused its efforts in having a professionalized communication policy «which made use of modern technologies, especially audio-visual ones, that would make reaching the wider population possible», so as to foster a «climate of interest, openness and understanding of the problems which affect our country’s fate on a larger scale» (doc. 52, dodis.ch/35368, original in French). Opinions however varied as to how much the population should be informed of. The footnotes of the over 180 documents printed in the new volume provide references to about 1500 other documents, which can accessed though the online database Dodis (www.dodis.ch).

One of these documents is a list established by the Integration Bureau, which bears the following intriguing title: «What should not be said in the declaration to the people regarding the treaty between Switzerland and EEC» (dodis.ch/36230, original title in German).

«The Conference on Security and Co-Operation in Europe does not end with the ceremonial signing of the final act in Helsinki on August 1st of this year. In fact in many ways it is just beginning» stated a circular of the FDFA in October 1975. Nevertheless, it marks a milestone of European history, reached at that time. For Switzerland, it designated a decisive step in the opening of its foreign policy.