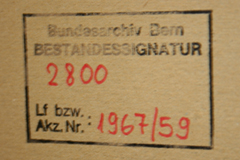 The Dodis research centre, as an institution of free academic research, is subjected to the same legal requirements regarding the access to archive records as all other researchers.

Article 20 of the Federal Constitution of Switzerland guarantees academic freedom. As a researching enterprise, the current legal regulations allow the DDS to act completely independent in their choice of documents. The academic responsibility is borne by the director of the DDS. The research group of the DDS is committed to the code of ethics of the Swiss Society of History (SSH) and its principals of freedom of scientific and historical research.

Access to the records in the Swiss Federal Archives is regulated in the Federal Constitution of the Swiss Confederation by the Federal Act on Archiving (ArchA) of the 26th of June 1998. According to Article 9 (Principle of Freedom of Access and Period of Retention), the records are available to the public for free after a period of 30 years. Exceptions are recorded in Article 11 (Extended retention period for personal data) and Article 12 (Further restrictions on consultation). The records subjected to an extended retention period issued by the Federal Council in respect to Article 12 are published annually in Annex 3 (List of Archive Records with Extended Retention Periods) of the Ordinance to the Federal Act on Archiving (Archiving Ordinance). The Dodis research group regularly submit requests for consultation according to Article 13 (Consultation during the retention period).

Consultation of records subjected to a retention period «may be made subject to conditions; in particular, it may be required that personal data be rendered anonymous», according to Article 13, paragraph 3 of the FAA. All documents from declassified records selected by the Dodis research group could be published unedited and unrestricted in the volumes of the series 1945 and following as well as on dodis.ch.

The following index contains the records that were not made accessible to the Dodis research group by the responsible authority in the relevant department. The list is updated on a regular basis.

The Dodis research group regularly resubmits requests for consultation for those records, they have not been allowed to consult during their normal research process for legal reasons. This provides the possibility for the responsible authoritiy to review whether an extended retention period is still justified in these cases. The index «List of Records in the Swiss Federal Archives declassified at a later time» contains the records that were declassified after the normal research process. It also litst the Dodis number of any documents subsequently published from these records. The list is updated on a regular basis.

According to the ArchA, the moment a document, that prior to being archived was protected by a classification note (e.g. confidential, secret, etc.), is handed over to the federal archives, its protection is no longer guaranteed by its classification note, but by the retention period set by the ArchA. The classification notes of all documents published in Dodis are therefore legally obsolete and only of a historical value.